Next: Paco Inzunza: Undocumented but Beloved » 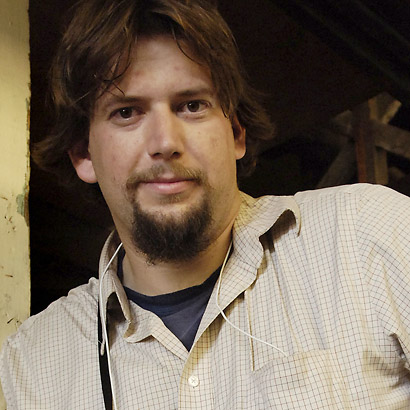 "I've got about two of those Tupperware sized boxes full of thank-you notes," says Willie Harlow. "I never throw one away," he continues, emptying the boxes onto his bed, gently spreading out the stacks of letters, each containing words of gratitude from the family and friends of those that he has buried in his 11 years as a funeral director with Campbell-Lewis Funeral Home in Marshall, Missouri. He smiles wryly as he fumbles through the stacks, pulling memories of each person out of thin air like a magician, weaving friendly stories of the those who have passed through the funeral home. But, unlike a magician, the town knows the secret to his trick: Willie grew up here. Many of those he buries are his own family and friends and Willie treats them - and their families - accordingly.

"It took a long time for me to realize how young Willie is," says an administrative assistant with the Saline County Prosecutorâs Office. Willie seems older than his 29-years. He is outwardly compassionate, humorous, and direct, the kind of person who can't go anywhere without having to stop to talk with someone he knows. But the weight of his job makes him as much of an introvert as an extrovert. He has prepared his own funeral arrangements and has them carefully tucked in his desk in the basement of the funeral home. "If something happens, they know where to find them," says Willie, acknowledging that death can be especially difficult for family. He understands that having these plans pre-arranged can preempt additional burden on family in times of grief.

"Life is the only thing you can't get out of alive," jokes Willie. He admits that this truism is the root of his income and in death - like anything else - people have a choice about which funeral home to take their loved one to. With four competing funeral homes in Marshall, there is no shortage of people willing to supply funeral services. Willie estimates Lewis Campbell Funeral Home does between 80 and 90% of the available business in Marshall. He adamantly believes the success of the funeral home is built on positive personal relationships that he and the rest of the home's staff maintain throughout the community.

Judging by Willie's unofficial track record, this is probably true. People smile at the mention of his name and he is well known throughout this town of 12,000. He was recently elected Saline Countyâs newest coroner, taking over after the 35-year term of his predecessor. He won this three-way election against a local doctor and a local chiropractor by a substantial margin. In short, people like Willie and Willie likes people. Dealing in death may not seem like the kind of life that suits a person of Willie's character, but it seems to fit him just fine.

I worked for an ambulance company through college. The company was started more than forty years ago as a service that hauled bodies for mortuaries. As people started to see the need for vehicles to transport the sick and injured to the hospital, and the old hearse-style vehicle became a natural choice because patients could be laid in the back during transport. The company went from moving bodies for funeral homes to moving patients to the hospital. Years went by and the formal education required of those attending to patients on ambulances created a new business independent of mortuaries, though some companies retained their ties.

Mine was one of them. The company ran 17,000 calls a year on patients who were still living and viable and, at night, the phone lines from several local mortuaries were forwarded to the company. During the night hours our dispatchers would take calls for body removals and pass them along to ambulance crews who would transport the dead to a local mortuary. Some of the other mortuaries who passed their calls along to our company would not have us move the bodies instead opting for our dispatcher to page their on-call mortician who would take the information and do the body removal themselves.

Everyone talked about one mortuary in particular. It seemed like every time someone would page the on-call mortician, they would be greeted by a soft Marilyn Monroe-like voice. This voice on the other end of the phone was a common topic of conversation in the predominantly male ambulance quarters. Nobody had ever met her and it seemed unusual that someone whose business was death could sound so beautiful. Morticians were not supposed to be beautiful, much less normal.

Since I left the ambulance company, I've always been curious about the dual life of morticians (correctly called funeral directors and embalmers). Their trade is somewhat brutal and gruesome by nature. The process of embalming a body involves draining the body of its fluids, replacing them with a poisonous mix of preservative that firms the cadaver and adds color to the skin. Those who have had autopsies performed have their abdomen and thorax cut open, compromising the vasculature that normally transports the preservative fluids throughout the body. These bodies are more or less stuffed with a saw-dust like substance soaked in preservative called autopsy compound. Cremation is a similarly intense process in which the body is placed in a furnace and superheated until all that remains is a fine dust, some bone fragments, and the various metal items surgically inserted into the body. The metal is sorted out and the remaining substance is put through a device that pulverizes the bone fragment into dust.

In spite of its macabre nature, funeral direction is a needed and respectable profession. So when Willie Harlow of Marshall, Missouri agreed to have me along for the week, I took the opportunity and looked for evidence of the duality inherent in living so close to death.