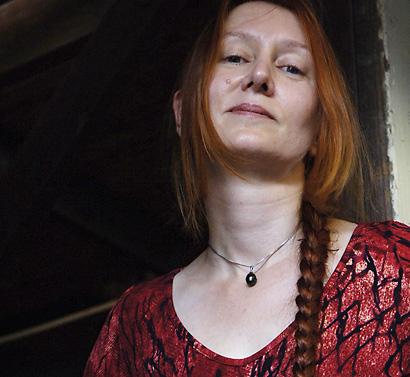 Astrid Gomez received a wrestling scholarship to attend the Missouri Valley College in 2004. Originally from Hereford, Tx, she is a nationally recognized wrestler in a sport that most think of for men only. She's 20 years old.

Last year she lived in a dormitory room with Brittany, but the two decided to move out of the dormitory to a mobile home park and they were joined by Astrid's boyfriend. William Shows, 23. William is currently looking for employment.

Astrid has been wrestling since 9th grade and has a passion for it. At Missouri Valley College she studies Economics and Mass Communications. She hopes eventually to join her mother in a partnership to run a restaurant, and she hopes also to have a career in television.

William and Astrid have a strong relationship - and though they do sometimes argue they love being together. Recently arrived from Texas and with no close friends in the area, William says, "I'm with Astrid, that's enough for me,"