Next: No, We Are Not Katrina Victims » 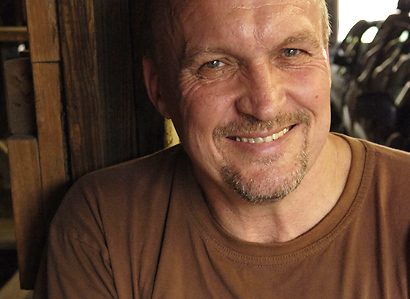 Arrow Street runs west off Highway 65 and on the right, about twenty yards before reaching the Marshall town square, four doors deliver you into Generations bar and restaurant.

Entering the door closest to the town square early any morning, you will find a collection of farmers and townsfolk enjoying the hearty breakfasts. Hot cakes, ham steaks, hash browns and bottomless cups of brewed coffee are quickly delivered to your table.

Businessmen, current and retired, tend to occupy tables at the rear of the restaraunt. Thirty years back it was the big table at the front of the diner that attracted the business crowd.

"The old men died off one at a time", Generations owner Cathy van Buskirk told me on my first visit. "The business crowd won't sit there today because they think if you sit there you dieâ."

Cathy's husband died in 1988 and admits she was mean for three years. She was looking for something to distract her from her misery when Cathy's cousin, who owned the restaurant in Marshall, invited her to buy the business.

"I came in one night to look at the place and Nick Huesgen was behind the bar. I came in every night for a month and soon worked out it was Nick who made the place work".

Cathy called Nick the next day and asked if he would like to buy the bar he was working in.

"Hell we can get money."

That was on a Friday. Cathy invited Nick over to her house on the Sunday and Monday morning they made an offer and by the end of the day they were the proud owners of the restaurant. There were three partners Cathy, Nick and a kid who was 26. Three generations were running the place so they decided to call their new venture "Generations." Nick was in college at the time with a degree in computer programming.

Seventeen years later, Cathy and Nick are still in business at Generations. Their relationship is a strange one. Cathy looks after the daytime business and Nick works nights. Cathy is loud and Nick is quiet.

Most the time they get on well, but on occasions there are big blow-ups. "Cathy walks one way, I walk the other and ten minutes later, it's over and we get on with our lives," Nick told me.

"My philosophy with staff is if you've got a problem, bring me the solution, don't bring me the problem. If you can't figure out that something needs to be changed don't come bitchin' to me - I'm not listenin'."

Cathy's homespun philosophy is much sought-after in Marshall.

Although Cathy has never been tempted to hang a "Free Advice" shingle on the front door of Generations, Marshall residents of all ages regularly seek her counsel and advice on a wide range of subjects and problems

"Sometimes they don't wanna hear what they hear but I give it to them straight.

"Some of the kids have been coming in here since they were young enough for me to wrap them in a tea towel 'cause they get cold".

Cathy credits her past life as a nurse and her current career running a bar with preparing her to offer all kinds of advice.

"My dad was a straight up person" he taught me that you have to take some responsibility for what you do and make it yours.

"I'll always help someone if they'll try to help themselves. I'll never sell anyone out but if you're really screwing up stay away from me for a while."

Cathy's straight shooting ways aren't for everyone in Marshall. A local commented, "That's just Cathy, you know how she is."