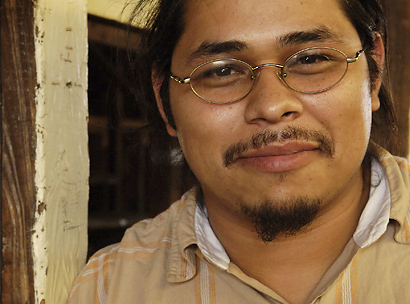 As a 35-year-old single mother of three, Carmen Cabrera has also taken on the role as the owner of Yesenia's Grocery and Restaurant. She is finding that the balance between keeping her business afloat and providing a stable life for her children is a difficult one.

Born in El Salvador, Carmen married at age 16, and moved to the U.S. in 1988. She lived briefly in Marshall before going to New York where she worked at a cosmetic factory. A little more than a year ago, she moved back to Marshall with her husband and three children, Juan Carlos, 15, Yesenia, 12, and Jonathan, 8. After her husband moved back to New York, she became the sole caretaker of the business and became the family's only source of income.

She said she decided to return to Marshall for the sake of her children. She said she likes the stable environment of the small Midwestern town. "Es bien calmado y es mejor para la educacion de los ninos," she said, meaning "It's very calm and its better for the children's education."

Yesenia's Grocery and Restaurant is located less than a block from the historic town square. The growing Latino population (estimated at 7% of Marshall's 12,000 residents) makes up the majority of her clientele and she is still learning to run a small business - struggling to pay the bills at home as well as at the store.

She recently applied for a job at ConAgra to supplement income from the restaurant and grocery store. Cabrera relies on friends and especially her landlord for support during these first few months on her own. "Seria mas dificil sin ellos pero yo creo que si lo puedo acer," she said, meaning "It would be difficult without them but I think I could do it [alone]."

Continuing to adapt to her newfound roles as a single mother and a business owner, the struggle has been hard for Carmen but she is determined to succeed on her own.